Recently, the M1 self-developed chip released by Apple has attracted much attention,  Embedic seems to be able to see the blueprint of the future SoC from the M1. 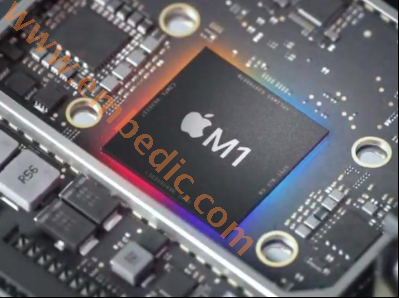 M1 is based on a custom Apple SOC silicon chip, which will power the new Macbook Air and some Macbook Pro and Mac Mini models. Apple's new M1 chip has many things. It is much faster: computers with it are three times faster than their predecessors in most tasks. It is much more efficient and has twice the battery life of the Intel (intel) processor-powered Macbook replaced by the new laptop. As you can imagine, the M1 chip's technology in SoC is by no means ordinary. Looking at the photos of Apple’s M1 mold, it does not seem to be an innovation to design it as chiplets. In addition, the additional interconnection and communication overhead will bring more trouble.

For Apple, another reason to support SoC methods is that most of them are beyond the scope of using any other physical layout IP cores. In order to optimize the system and (probably) improve the user experience, Apple is responsible for most of the circuit blocks and focuses on strict control of physical design and hardware-software integration. They will not buy silicon chips or hard-core IP designed by suppliers and embed them in their processor designs. 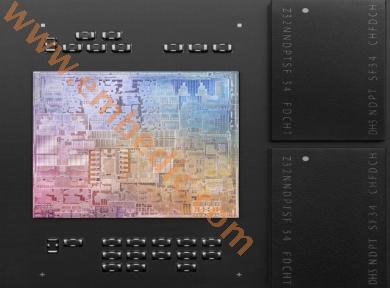 Just like the Lightning Dock interface of iPhone and iPad, Apple's idea of ​​taking over the computer platform has been around for some time. One of the methods mentioned is that arm-based mobile processors may enter the traditional computer field by combining iOS software with A-series chips. Since Apple seems to concentrate most of its resources on the iPhone and iPad, this is somewhat detrimental to the PC department. But we now see that Apple is designing for their complete OS X system.

Look at the overall layout of the M1 chip, its design is very similar to the A series processors and mobile application processors. But it may take a while to figure out exactly where the two overlap, and many floor plan analysts will begin to compare Apple's A14 and M1.

The new generation of computers, especially Apple notebooks, are often criticized for using BGA packages instead of inserting modules to design RAM upgrade paths. Apple puts the DRAM and M1 molds on a common package substrate to bring this concept closer to the processor. But this is not chiplets. Apple photos described them as a kind of DRAM packaged goods, just like modules or motherboards. Although Apple has not designed its own DRAM, it is happy to reshape the current commercial components.

M1 also has a unified memory architecture (UMA). M1 unifies its high-bandwidth, low-latency memory into a single pool in a custom package. In this way, all technologies in the SoC can access the same data without copying data between multiple memory pools. This greatly improves performance and power efficiency. Therefore, video applications are faster, games are richer and more detailed, image processing has lightning speed, and your entire system reacts more sensitively.

Apple claims that the M1 Macbook Air will be 3.5 times faster than the latest Intel version. Part of the performance improvement may be due to the type of DRAM they use in this version. Unfortunately, they did not describe any clues to the "unified memory architecture" in detail. Going back to the silicon chip, combining the GPU with the chip may be another performance improvement.

We return to the problem of decomposing chips and optimizing the system through packaging and integration, and compare the M1 SoC chip layout with more traditional multi-core processors. For example, to meet the needs of the notebook, desktop, and server markets, Intel has been producing a series of microprocessors. Taking laptops as an example, we need to meet user needs, that is, what they want is a more cost-effective device, and players focus on the best performance. Intel needs to produce chips with only a few or more cores. This can be achieved through different designs, or by disabling the core to solve low-cost applications. Neither option seems too attractive.

By splitting the core and other functions into small chips that can be integrated as needed on the packaging platform, a smaller range of applications can be optimized. This is not to say that chip technology will not bring additional costs, but the potential is definitely there. Intel has been actively promoting this idea through two packaging technologies-Foveros and Embedded Multimode Interconnect Bridge (EMIB), both of which are already in production equipment.

Is the performance of M1 really that exaggerated?

It is difficult for Apple to claim the performance of the new M1 chip without exaggeration. Generally, major advances in computing performance may increase processing speed by 20% or 30%-but new computers will increase this number by ten times. Data shows that the general power of computers is three times that of the original. The speed is up to 11 times. This may sound unbelievable. Apple knew this because it didn't actually expect these computers to make such a big improvement: they couldn't believe it even when he got these new computers.

AMD is also very active in this field, and their new Zen 3 architecture design highlights the scalability of the chiplet approach. AMD divides this design into a computing core chip (CCD) and an independent chip for I/O functions-IO die (IOD).

Simply talk about the CCD in the article, it does not refer to the sensor in the camera. CCX is short for CPU Complex. It is the most basic unit of AMD Zen architecture. Each CCX integrates four Zen cores. Each core has independent L1 and L2 caches. The core has a complete computing unit. Like the previous Bulldozer architecture shared floating-point unit, these four cores will share the L3 cache, and each core can optionally add SMT hyperthreading, and the cores inside CCX can be shut down separately.

The CCD referred to by AMD is actually an abbreviation of Core Chiplet Die, an abbreviation born with the latest Zen 2 architecture processor. The Zen 2 architecture processor is not a big core packaged together, but is divided into two parts: the CCD core and the I/O core. The CCD core is a pure computing core, which contains two CCXs, that is, each CCD It has 8 cores and 16 threads, and the memory, PCI-E, USB and SATA controllers are all integrated into the I/O core, and these cores will be packaged together into a Ryzen 3000 series processor. 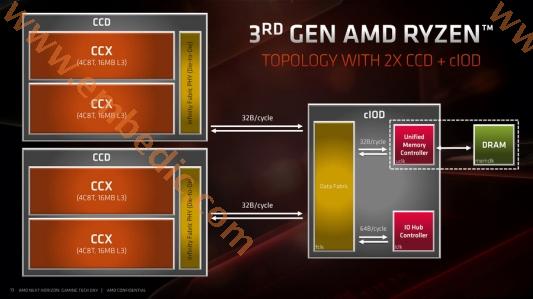 The new Ryzen 5000 chip is a typical example of integrated chip and processor core expansion. First, Ryzen's design adds more cores by adding a second CCD to meet specific needs. Second, Ryzen is a typical case of heterogeneous integration. The chip manufacturing process is TSMC’s 7nm technology, while the IOD chip is in GlobalFoundries’ 12nm process. This is the new computing paradigm. 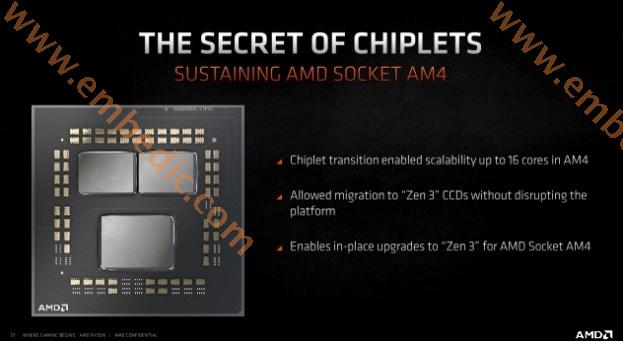 It is time to consider the future of processor development. The monopoly of Apple's internal silicon design is very specific. Apple has at most two different product types-notebooks and desktops. For the iMac product line, I hope that the same design can be reused there. After all, the M1-based Macbook Pro uses the same processor as the air, but adds a fan, which makes the operation of the same processor more difficult. As long as Apple continues to support this end market, their products may continue to use Intel processors, so the Mac Pro series may not have its own design.

What about mobile application processors? Apple’s A series, Qualcomm’s Snapdragon and Samsung’s Exynos will continue to design complete SoC chips.

Intel and AMD are a different story. Both companies are designed for all computers except Apple, and need to screen a large number of potential users. More design flexibility provides advantages for occupying a larger market. In order to meet higher-end applications, it can be achieved by selectively activating more cores to cover too many products or the same mold. In the long run It's a bit difficult to do so. However, the chiplet approach still makes sense, and AMD and Intel have already moved in this direction.

Looking back, Xilinx achieved early heterogeneous integration through its 2.5D integration method, which used a silicon interposer as a platform for multiple FPGA chips on Virtex 7. At the time, we were talking about the first step of 3D integration. Xilinx Chief Technology Officer Ivo Bolsens said that 2.5D technology may be a long-term alternative to 3D technology. Nearly ten years later, this seems to be the case. 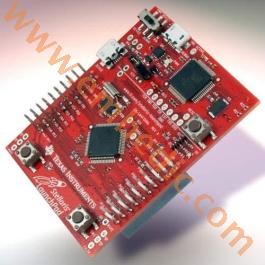 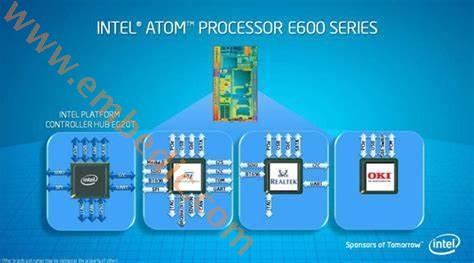 How much improvement will there be after M1?

Apple named its first self-developed chip M1. It is understood that M1 Garand was the name used by the standard American military rifles during World War II and the Korean War. Obviously there will be products such as M2 and M3; this name has sparked speculation about the appearance of the future mac computer. Of course Apple will not comment on what may appear in these chips-it said at the press conference that the new processors are the beginning of the chip family, but nothing more-but there are clues that they are in the first generation of computers. What might be done in it.

M1 first launched three different products: Macbook Air, Macbook Pro and MacMini. The latter occupies its place in the lineup, but given that Air and Pro now have exactly the same chips, how do they stay different?

"Heat capacity"! Apple Software Director Craig Federighi said decisively. The Pro has a fan-Apple calls it an "active cooling system", while the Air does not. The rest of the performance comes from there.

Federighi began to draw a graph that everyone is familiar with. What really hinders the development of these chips is heat: when you give them more cooling, they become faster. Macbooks also have some other advantages, such as larger battery capacity, but what really makes them roar is the extra headroom.

If this is the difference between Macbook Air and Macbook Pro-even in a larger computer, everything is tightly packed together-imagine what a computer like Mac Pro might look like Performance, the Mac Pro has three huge fans. Of course, Apple will not participate in the planning of this vision, but if they are not going to speculate, then we can; these computers, once ready, will indeed be very fast.

Although M1 is just a small chip, it can determine the future and fate of the world's largest company.