What is the difference between embedded and microcontroller 2021?

Anyone who works in information technology related jobs must have heard of embedded and microcontroller.

We all know that these two terms, and hardware systems have a very close relationship. However, if you ask exactly what is embedded and what is microcontroller, and what is the difference between them, I believe most people can not explain clearly.

Today, Embedic will give you an introduction to science, to reveal the answer to the above question.

IEEE (Institute of Electrical and Electronics Engineers) definition of embedded systems is: "devices used to control, monitor, or assist in the operation of machines and equipment".

The domestic academic definition is a bit more specific and easier to understand.

Embedded system, is application-centric, based on computer technology, software and hardware can be cut, for special computer systems with strict requirements on functionality, reliability, cost, volume and power consumption.

Application-centric indicates that the embedded system is of clear practical use. Based on computer technology, it shows that it is actually a special kind of computer. Hardware and software can be cut, indicating that it has strong flexibility and customizability.

What is the specific "dedicated" direction for embedded system?

The following are some examples.

All of the above-mentioned fields use embedded systems. This is just the tip of the iceberg.

It can be said that the embedded system completely surrounds us and affects our work and life all the time.

Embedded system, since it is a computer system, it must be inseparable from the hardware and software. 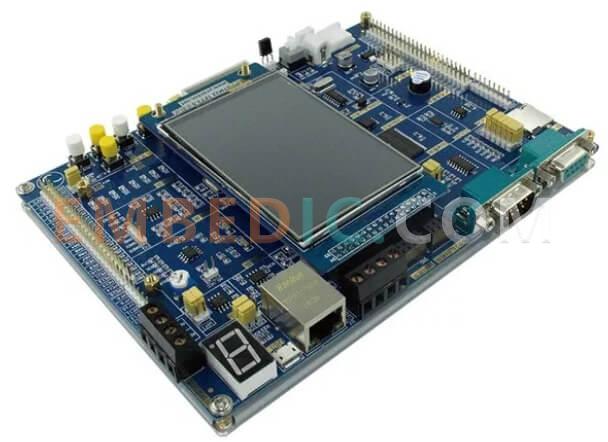 DSP processors are dedicated to signal processing and are specially designed in the system structure and instruction algorithms. It is widely used in digital filtering, FFT, and spectrum analysis. Typical representative is the TMS320C2000/C5000 series from TI (Texas Instruments).

Embedic to introduce it in detail.

Microcontroller, also known as Single-Chip Microcontroller, is called Single-Chip Microcomputer in English. It is actually an integrated circuit chip, which is a super large-scale integrated circuit technology, CPU, RAM, ROM, input/output and interrupt system, timer/counter and other functions, stuffed into a silicon chip, into a super small computer. In that case, the microcontroller is not an embedded system? Don't worry, let's read on.

Microcontroller technology was born in the late 1970s, and in the early days it was 4-bit, and later developed into 8-bit, 16-bit, and 32-bit. It really rose to prominence in the 8-bit era. 8-bit microcontrollers are very powerful and are widely used in industrial control, instrumentation, home appliances, automobiles and other fields.

The 51 microcontroller actually has no technical advantage now and is a very old technology. The reason for its tenacity, in addition to its former popularity, is that Intel has completely opened up the copyright of the 51 core. Therefore, no matter any unit or individual, they can use 51 microcontroller without any fear of paying and without worrying about the risk of copyright.

STM32, is STMicroelectronics company launched based on the ARM Cortex-M core of general-purpose microcontroller.

ARM has been introduced to you before by Xiaozao Jun. It is currently one of the world's most powerful chip design companies, using the rapid development of cell phone chips and the rise of the Internet of Things market share is huge. In the field of microcontrollers, ARM's Cortex-M core has an overwhelming advantage and has become the absolute mainstream. Many semiconductor companies have abandoned their original architectures and switched to ARM architecture microcontrollers. STM32 hardware configuration can meet most of the IoT development needs, development tools and related documentation is complete, has become the current microcontroller learning object of choice.

The difference between embedded and microcontroller

Speaking of which, let's see, what is the difference between embedded and microcontroller.

At some point, the microcontroller itself is powerful enough to be used as an embedded system. It is cheaper and relatively less difficult to develop and maintain, especially for some more targeted applications. Embedded systems, on the other hand, are theoretically more powerful and more widely used, but are more complex and difficult to develop.

The learning value of embedded and microcontroller

In recent years, there is a phrase is widely spread, that is - "software is king". People generally believe that the value of software knowledge is much greater than hardware, and learning software, engaged in the direction of software, will be easier to find work, find higher income, more promising work.

Embedic think this idea is not correct.

Having the ability to combine hardware and software is far more valuable than simply mastering a certain program development language.

Secondly, embedded and microcontroller have a wide range of application scenarios, and there are project needs and talent demands in various fields. According to the authority statistics, the current annual shortage of embedded talents in China is as high as 500,000. Especially embedded software development is one of the hottest and most popular careers in the next few years. Senior embedded engineer with 10 years of experience can earn about 300,000-500,000 RMB per year. And our country is now vigorously developing chip industry, which will also drive the employment of embedded talents and improve the treatment. With the deepening of 5G construction, the whole society is developing in the direction of "Internet of Everything". IOT technology will also usher in unprecedented historical opportunities. Embedded and microcontroller technology is an important part of IoT technology, and will also enter the fast lane of development.

Therefore, although the learning process will be tough, Embedic still recommends aspiring young people to focus on this track. The harder the technology is, the more painful the process is, the better it is for building a competitive barrier. At a later stage, personal value can be further reflected.