Texas Instruments (TI) MSP430TM series microcontroller is a streamlined instruction set processor (Reduced Instruction Set Computing, RISC) based 16-bit mixed-signal processor. The chip has an integrated analog-to-digital converter (ADC) and digital-to-analog converter (DAC), which makes it capable of receiving and outputting not only digital signals, but also analog signals, hence the name mixed-signal processor. The block diagram of the MSP430 family of microcontrollers is shown in the figure. 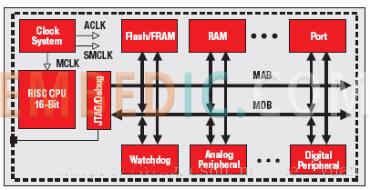 The CPU module in the ti launchpad MSP430 family of microcontrollers, the "RISC CPU 16-Bit" module in the diagram above, is connected to the program memory module, data memory module, and various external device modules via the Memory Address Bus (MAB) and Memory Data Bus (MDB), and uses a unified CPU instruction and addressing mode.

If programming in assembly language, developers need to understand the internal registers, various addressing modes and assembly instructions of the CPU; if programming in C language, these contents do not need much attention, and the use of registers and the selection of addressing modes will be handled by the compiler system. This book adopts C language to realize the development of application system.

The "Flash/FRAM" module is used as program memory, the "RAM" module is used as data memory, and the "Port" module indicates the input/output pins of the chip. MSP430 family of microcontrollers has a variety of chip models, the same model chip also has a variety of package types, a total of more than 400. In all these models of chips, the chip internal program memory storage capacity from the smallest 0.5KB, to the largest 256KB; data memory storage capacity from the smallest 128B, to the largest 18KB; input / output pin number from 14 to 113. Different chip internal resource configurations are used to meet the different application requirements of different users in terms of functionality and cost.

Watchdog timer, commonly known as the watchdog "Watchdog", used to monitor the working status of the microcontroller. It will force the system to reset when there is an abnormal program operation.

Module "JTAG/Debug" is used to support the download and debugging of user programs, the JTAG interface establishes a link between the computer used for development and the MSP430 microcontroller chip. all models of MSP430 series microcontrollers support programming of program memory through the JTAG interface. The MSP430 launchpad family of microcontrollers contains internal on-chip debug logic, which supports both high-precision analog debug and full-speed operation debug. Some models of the chip also support a 2-wire interface called "Spy-Bi-Wire", which also supports the download and debugging of user programs.

The MSP430x2xx subfamily of microcontrollers can also be subdivided into the MSP430G2xx, MSP430F2xx and MSP430AFE2xx subfamilies. This article only introduces the MSP430G2231 and MSP430F2619 chips of these 2 models. Hardware is the basis for software development, hardware is also the object of software control, only to understand the hardware situation in order to choose the right model of chip for the application system, and the successful completion of software development.

Chip MSP430G2231 is one of the many chips supported in the LaunchPad (MSP-ESP430G2) development kit provided by Texas Instruments (TI) to universities, in addition, MSP430G2231 chip has a double inline type package, easy to assemble application circuits on the breadboard. Assemble their own application circuit is very important for beginners, even if the microcontroller is used to write programs to achieve the function of the circuit, but the hardware is the basis for the software, but also the software control object. Only with an in-depth understanding of the hardware circuit can you write a good program. Assembling the circuit is an effective way to understand the hardware circuit. one of the shortcomings of the MSP430G2xx family of chips is that it does not support external high resonant frequency crystal clock source, it only supports a 32.768kHz clock crystal. Chip MSP430F2619 supports external crystal clock sources up to 16MHz frequency, but of course also supports internal clock sources without adding any external devices. In addition, the chip MSP430F2619 has a wider variety of peripheral modules and a larger number of logic resources than the chip MSP430G2231.

The MSP430G2231 chip has a dual inline type package, which is very convenient for beginners because the dual inline type package is easy to assemble the application circuit on the breadboard. The ability to observe the work of their own completed design, assembly of the circuit will enable designers to immediately experience the joy of success and enhance the interest in learning. Having an interest in what you are doing is an important condition for doing a good job. At the same time, theory and practice is also a very important method of work and learning.

The minimum system circuit diagram based on MSP430G2231 chip is shown in the figure below. 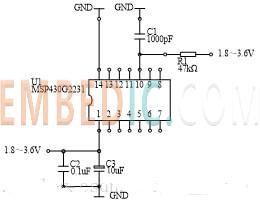 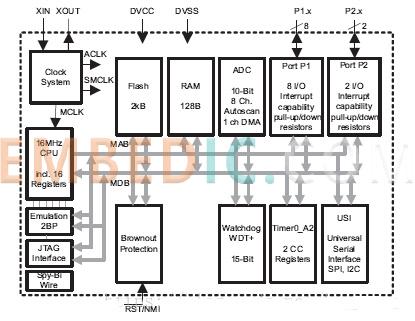 MSP430G2231 chip clock module "Clock System" can be driven by the following three clock sources, using a frequency of 32768Hz external crystal resonator oscillator, frequency of about 12kHz internal low-power oscillator and internal digital control oscillator ( Digitally Controlled Oscillator (DCO). To use the crystal oscillator, a crystal resonator with a resonant frequency of 32768Hz is placed between pin XIN (pin 13) and pin XOUT (pin 12), and each of the two pins is then grounded through a 12pF capacitor. Using the internal low-power oscillator and the internal DCO does not require any external devices to be added, and the DCO operating frequency can be adjusted by the user program. The disadvantage of using an internal clock source is that the clock frequency is not as stable and accurate as an oscillator using an external crystal resonator. The circuit shown in the figure uses an on-chip clock source to simplify the circuit composition.

The MSP430G2553 launchpad family of chips automatically selects a digital control oscillator (DCO) as the clock source after reset, with a default clock frequency of approximately 1 MHz. it is recommended that beginners use the chip's internal DCO, which reduces the number of wires and eliminates the need to program the clock module. 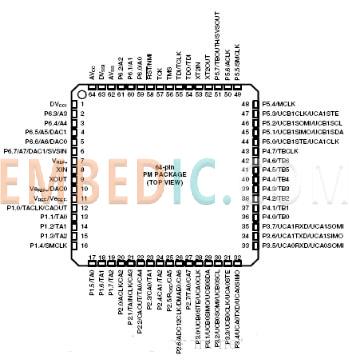 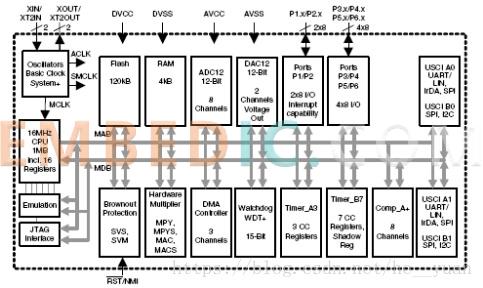 For digital signal interfaces, the MSP430F169 chip provides parallel and serial digital input/output ports. The former includes 6 ports with 8 bits, P1 to P6 ports; the latter has 2, both of which are capable of operating in UART, SPI, or I2C modes of operation. Each type of port can be set to connect to the chip's pins via user software.

MSP430 microcontroller basics series of microcontrollers is the most important feature of energy saving, for which the series of chips have user-programmable clock circuit and system operating mode. In order to meet the needs of different applications, TI offers a variety of models of chips, which have different prices, different functional module composition, different logic resources and different package forms.