Single-Chip Microcomputer is a kind of integrated circuit chip. It uses VLSI technology to integrate the central processing unit CPU, random access memory RAM, read-only memory ROM, multiple I/O ports, interrupt systems, and timers with data processing capabilities. /Counter and other functions (may also include display drive circuit, pulse width modulation circuit, analog multiplexer, A/D converter and other circuits) integrated on a silicon chip to form a small and complete microcomputer system, in industry Widely used in the field of control. From the 1980s, from the then 4-bit and 8-bit single-chip microcomputers to the current 300M high-speed single-chip microcomputer. 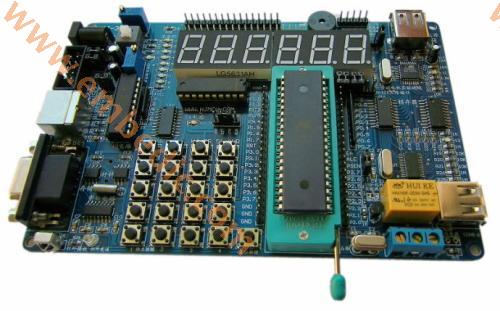 Microcontroller Parts, also known as single-chip microcontrollers, are not chips that complete a certain logic function, but integrate a computer system into a chip. It is equivalent to a miniature computer. Compared with a computer, the SCM only lacks I/O equipment. In a nutshell: a chip becomes a computer. Its small size, light weight and low price provide convenient conditions for learning, application and development. At the same time, learning to use Microcontroller Parts is the best choice to understand the principle and structure of computers.

Microcontroller Chip has been used in a wide range of fields, such as smart meters, real-time industrial control, communication equipment, navigation systems, and household appliances.

The arithmetic unit is composed of arithmetic components-Arithmetic & Logical Unit (ALU), accumulators and registers. The function of the ALU is to perform arithmetic or logical operations on the incoming data. The input source is two 8-bit data from the accumulator and the data register. ALU can complete operations such as adding, subtracting, AND, OR, comparing the size of these two data, and finally storing the result in the accumulator.

The calculator has two functions:

(3) Command and control the direction of data flow between CPU, memory and input and output devices.

Instructions include opcodes and operands.

The address register is used to save the address of the memory unit or I/O device that the current CPU wants to access. Due to the speed difference between memory and CPU, address registers must be used to keep address information until the memory read/write operation is completed.

Obviously, when the CPU stores data to the memory, the CPU accesses data from the internal memory, and the CPU reads instructions from the memory, address registers and data registers are all used. Similarly, if the address of the peripheral device is viewed as a memory address unit, then when the CPU and the peripheral device exchange information, the address register and the data register are also needed.

(1) The volume of Microcontroller is relatively small, the internal chip is used as a computer system, its structure is simple, but the function is perfect, it is very convenient to use, and can be modularized.

(3) The low voltage and low energy consumption of single-chip microcomputers are the first choice in people's daily life, providing convenience for production and research and development.

(4) The single-chip microcomputer has strong data processing and computing capabilities, can be used in various environments, and has strong control capabilities.

3. Using Harvard structure, the address space of program memory and data memory are independent, which is convenient for program design;

1. From the internal hardware to the software, there is a complete set of bitwise operating systems, called bit processors. The processing objects are not words or bytes but bits. It can not only process a certain bit of some special function registers on the chip, such as transfer, set, clear, test, etc., but also perform bit logic operations. Its functions are very complete and easy to use.

2. At the same time, a dual-function address interval is specially opened in the on-chip RAM interval, which is extremely flexible to use. This function undoubtedly provides users with great convenience.

3. Multiplication and division instructions, which also bring convenience to programming. Many 8-bit single-chip microcomputers do not have the multiplication function, and it is very inconvenient to program a subroutine call when doing multiplication.

In order to better improve the intelligence of smart electronic devices, humans can be allowed to control through simple language to achieve the purpose of voice human-computer interaction. At present, the voice processing chip has been developed and started to be used in smart electronic devices. The application of single-chip microcomputer in intelligent voice equipment is mainly divided into the following two parts: First, in terms of software settings, because the single-chip microcomputer can process some business logic through programming, it can operate the intelligent voice processing process. For example: in the navigation smart electronic device, some of the road names, distances, etc. can be extracted, and then broadcast; at the same time, you can also choose different names and kisses to broadcast, truly realize intelligent customized operation, and better satisfy User needs; second, in terms of hardware design, because smart voice devices consume more resources, in order to better extend the standby time of the product, single-chip technology will be used to dynamically control the power of the product to further reduce the power consumption. At the same time, it can also improve the response time of the hardware through the single-chip technology, and further improve the user experience.

For some electronic equipment, there will be automatic alarm settings. Alarm control is also an area frequently used by single-chip technology, which is mainly reflected in the following aspects: First, for some automatic alarm devices, such as: fires frequently used at home An alarm is a device that turns on a smart alarm when the external environment reaches a certain condition. If the smoke concentration in the room reaches a certain level, or the collected data from the outside reaches a certain state, it will automatically trigger the alarm setting to achieve smart alarm Second, for some smart electronic devices, if the external environment exceeds the working environment range of the device, or when the device has some abnormal conditions, it will trigger its own alarm mechanism, allowing users to know the device’s Operation details, and provide solutions based on alarm information. For example: In some factories, some equipment is often installed to monitor the production environment of the factory. When some abnormal data occurs, an alarm will occur. To ensure the normal operation of the equipment, equipment maintenance personnel need to deal with it in time to avoid A major failure occurred.

With the continuous improvement of medical equipment technology, single-chip microcomputers have begun to be widely used in medical equipment, which are mainly reflected in: First, intelligent monitoring of the patient’s physical characteristic data, some medical equipment can be installed on the patient and its The body data is collected, and then interacts with the background control system. If the patient's physical characteristics are found to be abnormal, an alarm will be generated in time. For example: some medical equipment can monitor the patient’s heartbeat, pulse, blood pressure, etc., if abnormalities are found, the doctor will be called for treatment in time; second, some smart electronic devices will also be used during the operation, for example: some operations require access In the case of avoiding surgery, the operation process can be completed by controlling the smart device to further reduce the patient’s pain and improve the speed of the patient’s body recovery; third, the smart physical examination data analysis device can integrate the user’s physical examination data After inputting it, and then inputting it to the analysis device, through comparison with normal data, the user’s physical illness can be predicted and diagnosed in time. With the continuous improvement of the level of medical technology in our country, the application of single-chip technology has become more and more extensive, improving the level of medical technology and better maintaining the health of patients.