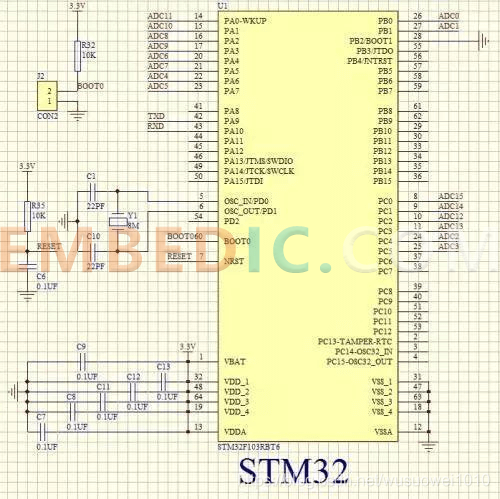 The role of the resistor: to prevent the input from overhanging, to reduce the interference of external current to the chip, to limit the current, and to increase the driving ability when the high level output.

GPIO_Mode_Out_OD open-drain output, the output terminal is equivalent to the collector of the triode. To get a high state requires a pull-up resistor to work. Suitable for doing current type drive, its ability to absorb current is relatively strong, generally within 20mA.

GPIO_Mode_AF_OD multiplexed open-drain output, GPIO_Mode_AF_PP multiplexed push-pull output. It can be understood as the configuration case when the GPIO port is used as a second function, i.e. not as a general-purpose IO port.

Open-drain output: IO output 0 is connected to GND, IO output 1, dangling, requires external pull-up resistor to achieve high output level. When the output is 1, the state of IO port is pulled high by the pull-up resistor, but because it is open-drain output mode, so that the IO port can also be changed to low or unchanged by the external circuit. It is possible to read IO input level change and realize the IO bidirectional function of C51.

There are usually five ways to use a pin function, and they are configured as follows.

1.As normal GPIO input: Configure the pin as floating input, with weak pull-up input or with weak pull-down input as needed, and do not enable all the multiplexed function modules corresponding to the pin.

2.As ordinary GPIO output: configure the pin as push-pull output or open-drain output as needed, and do not enable all the multiplexed function modules corresponding to the pin.

3.As a normal analog input: configure the pin as analog input mode, and do not enable all the multiplexed function modules corresponding to the pin.

4.As input of built-in peripheral: configure this pin as floating input, with weak pull-up input or with weak pull-down input as needed, and enable one of the multiplexer modules corresponding to this pin.

5.As the output of built-in peripheral: configure the pin as multiplexed push-pull output or multiplexed open-drain output as required, and enable all the multiplexed function modules corresponding to the pin.