EmbedIC
This website uses cookies. By using this site, you consent to the use of cookies. For more information, please take a look at our Privacy Policy.
Home > Embedded Events > MSP430 Low Power Consumption Principle and its Application of Sea Temperature Measurement

The MSP430 series MCU is a 16-bit ultra-low power hybrid MCU with a simplified instruction set. One of the biggest advantages of using MSP430 series microcontrollers is that it has low power consumption and high integration, which is very suitable for battery-powered and space-constrained working environments and portable applications.

MSP430 series microcontrollers can have very low power consumption, which is determined by its structural characteristics.

The clock module of MSP430F4XX series MCU has 3 clock sources: LFXT1CLK, XT2CLK, DCOCLK. LFXT1CLK is a low-frequency clock; XT2CLK is a high-frequency clock; DCOCLK is an on-chip digitally controlled RC oscillator, which is often used as a clock signal for systems and peripherals, and its stability can be controlled by FLL+ hardware.

The structure of the MSP430F4XX series microcontroller clock module is shown in Figure 1. ACLK comes from LFXT1CLK, which can be selected by software as the clock signal of each peripheral module. It is generally used for low-speed peripherals. After ACLK is divided by 1, 2, 4, and 8, it is used by external circuits to ensure that the clock systems of MSP430F4XX and MSP430F1XX are compatible; MCLK can be selected by software from one of LFXT1CLK, XT2CLK, DCOC-LK, and then obtained by 1, 2, 4, 8 frequency division, mainly used for CPU and system; SMCLK can be selected by software from XT2CLK or DCOCLK, mainly used for high speed Peripheral modules. According to different application requirements and system conditions, the user can select low frequency or high frequency through the program, and three different frequency clocks are output to different modules, so as to make reasonable use of the system voltage and achieve low power consumption of the entire system. 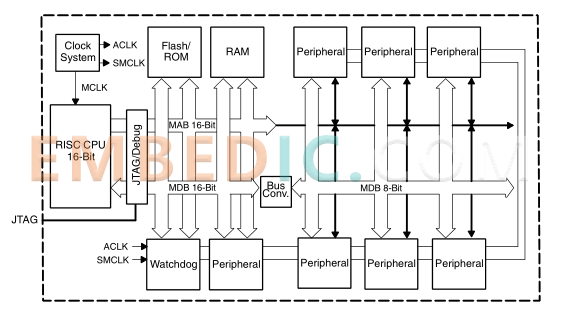 DCOCLK can be used as MCLK and SMCLK, but because the frequency of RC oscillator DCO will vary with temperature and voltage, the output frequency will be unstable. The clock module of MSP430F4XX series single-chip microcomputer applies the enhanced frequency-locked loop technology FLL+, which can stabilize the frequency of DCOCLK through the automatic adjustment of frequency integrator and modulator, and realizes the automatic adjustment of DCO frequency by hardware. The clock module of MSP430F1XX series single-chip microcomputer You need to adjust the DCO frequency by software.

Each module of the MSP430 series single-chip microcomputer runs completely independently, and the timer, A/D converter, etc. can run independently in the state of CPU sleep, thereby reducing the power consumption of the system when it is working. For example, the output of a square wave is realized in two ways.

Method 1 is the method commonly used by single-chip microcomputers, using the CPU to control the output port to achieve alternate conversion of high and low levels. In this way, the CPU is always working. The procedure of mode 1 is as follows:

Mode 2 Use the automatic flip mode of the MSP430 external module timer A1 to realize the alternate conversion of high and low levels. In this way, after the CPU sets the working mode of the timer A1, the waveform is controlled by the output of the timer A1, without the participation of the CPU at all, and the CPU can sleep, which reduces the power consumption of the system. The procedure of mode 2 is as follows:

Under normal circumstances, the software sets the CPU to a certain low power consumption mode, uses an interrupt to wake up the CPU from the dormant state when needed, and enters the corresponding dormant state after completing the work. MSP430 can wake up the CPU in a very short time, thereby shortening the active time of the CPU and reducing power consumption. The MSP430F4XX family of DCO oscillators has a response time of less than 6 μs to support long sleep cycles and burst event execution.

The system uses MSP430F4794 as a microprocessor to simultaneously complete data acquisition and processing tasks. NTC thermistor RT is used as the front-end temperature sensor, and its outstanding features are high sensitivity and fast response. Use 3 standard precision metal film resistors R1, R2, R3 and NTC thermistor RT to form a temperature measuring bridge, which is used to stimulate the differential voltage signal of the thermistor.

Use the built-in SD16_A (enhanced 16-bit ∑-△A/D converter) module inside the MSP430F4794 chip for analog/digital conversion. The differential signal sent from the front-end temperature sensor first passes through

The built-in input buffer of MSP430F4794 can avoid the measurement error caused by direct access to the program-controlled amplifier; after the input buffer, the program-controlled amplifier will differentially amplify the signal, and then send it to SD16_A; finally, the converted data will be stored in 16-bit A/ D converts the dedicated data memory to complete a data collection. The collected data is sent to the calculator for calculation, and finally the seawater temperature measurement result is obtained.

The MSP430F4794 chip has a low-temperature drift of 18 ppm and a reference voltage of 1.2 V. It is used to provide a voltage reference for the temperature measuring bridge and SD16_A at the same time to form a ratio measurement system, which can effectively eliminate the drift error in the measurement system. The schematic diagram of the system scheme is shown in Figure 3. 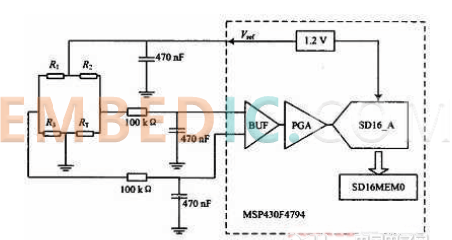 The crystal oscillator of 32768 Hz and 4 MHz is used as the clock input. When the system is in the temperature collection or communication state, the high frequency clock is used to obtain a higher processing speed. When the system is in the standby state, the low frequency clock is used to reduce the system power consumption. In this way, the contradiction between operating frequency and power consumption in the battery-powered low-current application system is better resolved.

Make full use of a variety of low-power operating modes provided by MSP430 in program design. When the temperature is collected, the system is converted from the active mode to the LPM0 working mode, and the CPU is in a dormant state, allowing the A/D converter to work independently. When the temperature is not collected, the system is in standby mode and enters the LPM3 working mode. When work is required, an interrupt occurs to wake up the CPU, and then enters a low-power mode after processing.

In this way, the system usually runs in the LPM3 working mode, which is also called sleep mode, and it is a working mode with the lowest power consumption while keeping the real-time clock active. Through the flexible conversion between various modes, the purpose of reducing system power consumption is realized.

With the rapid development of portable, low-power intelligent instruments and meters, microprocessors with low power consumption, high integration, good analog characteristics, and strong processing capabilities are required. MSP430 series microcontrollers meet such needs. The seawater temperature acquisition system designed using MSP430F4794 as a microprocessor can adapt to the seawater temperature measurement working environment with limited space and battery power supply. The temperature measurement system has been modified to obtain other ocean hydrological parameters such as salinity and waves of seawater, which has the significance of popularization and application.