Since the second half of last year, the semiconductor market has been caught in a wave of shortages and price hikes, but in the midst of this wave, many businesses have begun to stage the 36 strategies of Sun Tzu's Art of War. MCU market, for example, due to ST, NXP and other large manufacturers by the production capacity and the impact of the epidemic, prices rose, the supply cycle continues to lengthen, which not only disturbed the entire industry chain, but also let the inability to get the supply of downstream manufacturers feel the world of participation.

Now that it is the middle of the year, many market situations that were not visible in the first half of the year have gradually become clear, and the chaos in the MCU market has started to make many manufacturers start to decide the way forward. Whether they continue to wait or find another way out, the time has come to change the landscape of China's MCU market.

Thirty-Six Strategies to Take Advantage of the Fire

According to IC Insights, the global MCU market will reach $16 billion (RMB 103.3 billion) in 2021, with a compound annual growth rate of 6.7%. Looking at the Chinese market alone, the domestic MCU market size will reach 29.419 billion yuan in 2021, according to Omdia. However, with the high growth rate, the MCU market is facing the chaos of shortage of goods from overseas major manufacturers and soaring prices. 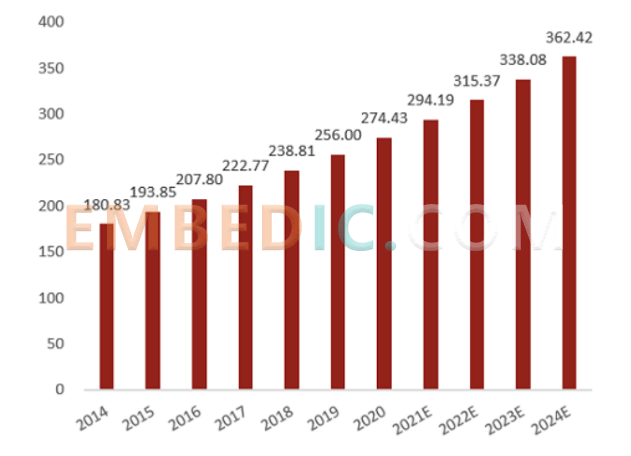 The imbalance of supply and demand in the market generally comes from two aspects, one is the lack of upstream supply and the other is the excessive downstream demand. An executive from a major industry player said in an interview with eFever.com that the MCU market is still relatively tight, and although it has eased, the supply gap is still large, which is determined by the upstream wafers. Domestic manufacturers of chips are also currently in short supply, production capacity is extremely tight.

Interestingly, however, according to current data, global chip sales in April this year reached a record high of nearly 100 billion pieces, which does not include shipments. And in January 2020 when the epidemic has not yet affected the chip industry, shipments of 73 billion.

This also means that today on the supply side has fully recovered, and has even begun to increase production. The executive said that the real situation in the market is a real shortage, and this is due to the combination of the explosion of automotive, 5G, domestic replacement, and exponential growth in demand.

As the saying goes, things are precious when they are scarce, and in the face of this situation, MCU market prices will naturally rise. Such as ST in June 1 will announce that the full range of products again increased prices, but as the original manufacturer, ST's price increase is not too exaggerated, after all, still need to do business with customers in the future, but the middlemen in the market began their own operation of God.

From the current situation, ST's chips in China's consumer sector accounts for most of the market, so it has been the most enthusiastic traders speculation, ST in addition to protect some large customers, small and medium-sized customers basically can not get the goods, the vast majority of the supply into the hands of traders.

Traders mostly do not care about the future, they only look at the moment, from the market situation, the current MCU channel market prices soared, ST's including models in the channel traders offer increase compared to 2019 has skyrocketed by nearly 12 times. Under the chaos, there will always be someone to take advantage of the fire.

MCU product prices rose sharply, so that downstream manufacturers can not afford to buy, buy can not do, even if made, the end customer will not buy, so it will find that the cost can not continue to transfer down. This year's 618 has been reflected, in previous years, loudly touted their own sales performance of consumer electronics manufacturers, now the voice is much smaller.

Higher prices for consumer electronics will force consumers to upgrade their products over time, meaning fewer buyers in the market. This also makes the downstream terminal manufacturers easily dare not raise prices, while the upstream MCU prices are high, giving manufacturers only a few choices, either the original channels to take the goods, or high prices from the market, either to change the flag, or no longer take orders, the more you do, the more you lose.

There are also smarter manufacturers see new business opportunities, since you can't beat, might as well join, the product is not profitable as well as the stock upsell. Industry executives mentioned that the big shortage of chips to the terminal brought a lot of trouble, first of all, received orders without chips, and secondly, even with the goods, the cost is greatly increased, consumers do not necessarily buy, so it is part of the terminal customers got the chip for resale.

However, he believes that this is only the immediate and short-lived benefits, the loss will be more, customers will continue to lose, so for the end customer to do a good job of the whole overall planning, arrange orders in advance, more prepared for different programs. The original factory who can not guarantee that can be stable delivery, the market is expected to be difficult to ease this year, is expected to be in the second half of next year should have relief.

On the other hand, many manufacturers face a puddle of muddy water market, directly said not to play. The so-called tree moved to death, people moved to live, directly abandoned the use of ST and other large manufacturers products, and turned to the more cost-effective Chinese domestic brands.

Can be found recently there have been more and more manufacturers choose Chinese domestic brands, such as National Technology, Zhaoyi innovation, Neusoft carrier, Hang Shun chip. Compared with ST, NXP and other products out of stock price increases, these national brands, although the supply is usually tight, but at least the price is relatively reasonable. Why better serve these customers, the relevant Chinese manufacturers have also made targeted design, such as the Hang Shun chip in software and hardware fully compatible with ST, easy to replace customers.

Some people revealed that recently saw the price of ST began to pull back, traders also could not resist the cost pressure began to dump, domestic chips instead of hoarding not much, domestic chips are better controlled, basically directly to the end customer, very few traders speculation.

However, today ST products are still relatively high, but the problem comes, as mentioned above, the production has now resumed, and even has been a considerable growth, but most of the downstream enterprises still can not get the goods. Where the goods have gone, it goes without saying. Many speculators in the water, but there is a good saying, only the tide receded, to know who is swimming naked.

MCU market price increase shortage actually happens every time, due to the epidemic, resulting in the largest scale this year, industry executives said that the current MCU manufacturers are slowly easing production capacity, coupled with June, July and August for the off-season, the turning point will be in the fourth quarter, the fourth quarter is a quarter of strong demand, by then to reflect the real needs of the market.

The Thirty-Six Stratagems of Darkness

The MCU market is still not completely rational, which is obviously difficult for many downstream manufacturers, but for the original domestic manufacturers, this is a rare window of opportunity. In the past, the market was dominated by big manufacturers such as ST, Renesas, and NXP, but this time, domestic companies also have a ticket to the stage.

From the market point of view, due to the shortage of foreign brands to increase prices, so that enterprises choose domestic manufacturers, which includes many industry leaders, well-known large manufacturers. On the one hand, because the domestic chip is becoming more and more stable, with a super high cost performance, on the other hand, because of a shortage of foreign chips, there is a great deal of hype traders, so that end customers suffer, turn to domestic alternative is actually a mature transformation. Domestic chips, after all, is in a period of rapid development, the country also vigorously support the upstream fabs, packaging and testing plants have expanded production, in the long run, the low-end domestic chip capacity will be much more than imported chips, so the shift to domestic MCU is the trend.

However, there is a problem, the window for Chinese manufacturers today may not be too long. Recently SAIC's chairman Chen Hong said publicly that the lack of core problem is expected to be alleviated in late July, and will basically return to normal in the third and fourth quarter of this year.

Of course, this is only the lack of core problem in the automotive market, want to fully recover, may not be so fast. But once the supply of large foreign manufacturers to resume, such as ST, NXP's large supply, some customers may return to the embrace of these large manufacturers among. After all, many domestic companies in order to higher service customers, compatibility design, although it allows customers to better transfer the program, but also left a way back for them.

For this issue, industry executives said compatible design is just a certain part of the product, this is just a knock on the door of the product launch to go. Most MCU manufacturers have a lot of product lines, such as a major manufacturer currently has twenty MCU family of more than 300 products, and so the products are positive design, customers will look for better and more suitable products in addition to part of the compatible product replacement, but a stable, familiar with it is difficult to cut back, because the price will always be cheaper than the ST, the main thing is to do a good job product, quality is excellent Domestic MCU manufacturers to consider the problem.

Another noteworthy news is that, after the Semiconductor Industry International Association (SEMI) report shows that the world's semiconductor manufacturers are expected to open 29 high-capacity fabs before 2022, China has 16 of them, including eight in the mainland, eight in Taiwan, these new fabs are expected to produce up to 2.6 million pieces of 8-inch wafers per month.

Such a large production volume will obviously greatly alleviate the current situation of the lack of cores, from a long-term perspective, the state supports vigorous investment in fabs, mainly because the future demand for MCU in the automotive, AIOT artificial intelligence and other industries will grow geometrically, the construction of these fabs can provide sufficient supply for the MCU market and even the entire chip industry.

Of course, on the other hand, the current wave of lack of cores will not reach 2023 at the latest (the completion of the fab construction time), and how the MCU market will develop depends on whether the domestic manufacturers can use this window to counteract.

Remember Atmel, which was abandoned by customers and eventually disappeared due to speculation and shortage of goods? What is more noteworthy is that today's intermediaries speculation, not only offended the downstream manufacturers, but also harmed the interests of the original manufacturer, and some Chinese manufacturers have begun to directly to end customers, automotive manufacturers have also begun to have a direct link with the chip factory, coupled with the previous few years such as TI continues to withdraw agency, traders, channel traders, how much future?