MCU based on Arm core

Today's MCUs are keeping up with the times, MCU companies are enhancing their peripheral portfolios and security, and some are even adding time-sensitive networking (TSN).

Undoubtedly, today's advanced MCUs are at the heart of a wide range of embedded systems in hundreds of applications. While some MCUs already offer a seemingly endless portfolio of computing power, peripheral sets, and memory options, they continue to evolve and improve every aspect of their offerings. In this article, we'll round up a series of new Arm core-based MCUs that bring new system capabilities to applications such as industrial systems, the Internet of Things, home automation, and white consumer goods.

Industry 4.0 is characterized by high network traffic and large data exchanges over multi-protocol networks. But getting industrial networks to work together seamlessly can be difficult - especially when time-sensitive communications are required.

Although Ethernet has been widely used in industrial systems, it does not provide deterministic communication by itself. Fortunately, a set of IEEE 802 standards collectively known as TSN-enabled Ethernet is deterministic by default. With all this in mind, in May, NXP Semiconductors introduced the first MCU with an integrated Gbps TSN switch, a dual-core device called the i. MX RT1180 cross-border MCU embedded with an 800 MHz Arm Cortex-M7 core and a 240 MHz Cortex-M33 core. According to the company, the i. MX RT1180 provides the multi-protocol connectivity needed to enable time-sensitive and real-time communications. This should enable engineers to create a unified and secure industrial IoT communications environment easily. The chip's ability to support multiple protocols is perhaps its most important feature. It supports the latest generation of TSN standards compliant with IEC 60802 industrial automation standards. Supported TSN-based protocols include OPC UA Pub-Sub, Profinet over TSN, and CC-Link IE TSN. 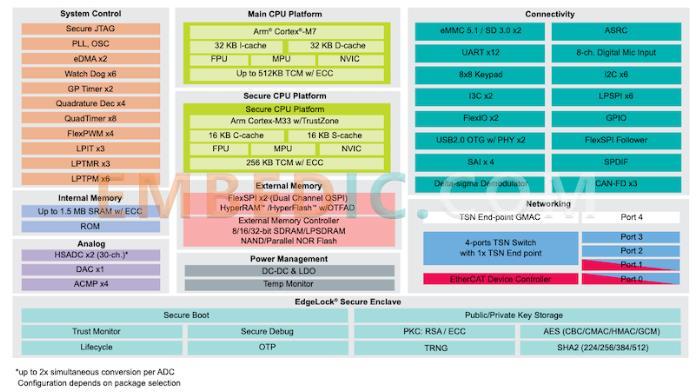 Block diagram of the i.MX RT1180 cross-border MCU. Image courtesy of NXP Semiconductors (click on the image or enlarge). Up to 5 Gbps ports are provided, including 4 ports on the TSN switch (Layer 2) and 1 on the TSN endpoint controller. Real-time industrial Ethernet protocols such as Profinet, EtherCAT, CC-Link IE Field, Ethernet/IP, HSR, etc., are also supported. In terms of security, the i. MX RT1180 includes an NXP EdgeLock security enclave, a pre-configured, self-managed and autonomous on-chip security subsystem that eliminates the difficulties associated with implementing robust system-wide security intelligence for industrial IoT applications. According to NXP, the MCU provides integrated solutions for various industrial operations, including I/O management, motor control, compact motion control, or gateway applications. i. MX RT1180 is also suitable for automotive connectivity applications, where the i. MX RT1180 can act as an intelligent switch between different automotive ECUs.

Security is a critical feature for MCU-based designs, especially for IoT systems, as they are, by definition, connected systems. One way for MCU suppliers to keep up with the times is to certify their products to security standards maintained by various standardization bodies in the industry. To that end, Renesas Electronics announced in May that its RA series of 32-bit Arm Cortex-M MCUs had been certified by the National Institute of Standards and Technology (NIST) Cryptographic Algorithm Verification Program (CAVP). Specifically, the security engine in the company's RA6M4, RA6M5, RA4M2, and RA4M3 MCUs has been certified by the CAVP. This adds several other IoT security features to the RA MCU chips.

While equipping its current MCU products with the latest security mechanisms, Renesas is looking ahead to its next set of products by providing a demonstration of its upcoming ArmCortex-M85 processor core-based MCUs. Last month, Renesas Electronics provided the first live MCU demonstration at Embedded World 2022. 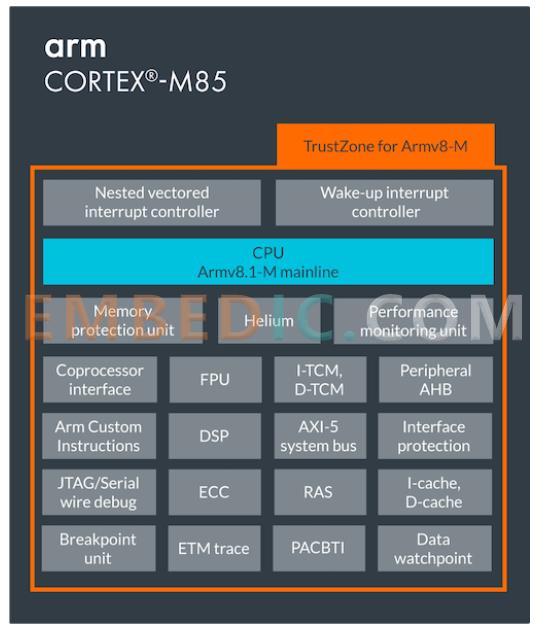 Arm announced in April that the Arm Cortex-M85 processor core features Helium technology. Renesas Electronics said the processor accelerates compute-intensive applications with advanced DSP/ML capabilities. According to the company, its upcoming M85-based RA family of MCUs will provide fully deterministic, low-latency, real-time operation for demanding applications in a wide range of markets. Renesas said the new MCUs are scheduled for release in 2023.

Last but not least, in mid-spring, Toshiba announced 21 new MCUs in its M3H group as new products for the company's TXZ+ family of advanced devices. The M3H family of MCUs is built on a 40 nm process and embeds a 120 MHz Arm Cortex-M3 core. For memory, these chips offer up to 512 KB of code flash and up to 32 KB of data flash with 100k write cycle endurance. The new MCUs also offer a various interface and motor control options. These include UART, I 2 C, encoder, and programmable motor control. Toshiba says the M3H group of devices is suitable for various applications, including home appliances, motors, and industrial equipment. The integrated digital LCD driver is expected to reduce the components engineers require to enable display functions and facilitate contrast adjustment.

The new MCUs also feature a high-speed, high-precision 12-bit analog-to-digital converter (ADC). The ADC allows separate samples and holds times for each of the ADC's 21 ADC input channels. Toshiba says the ADC can also be used to control AC motors and brushless DC motors. This is done in conjunction with the MCU's advanced programmable motor control circuitry, which can run in sync with the 12-bit ADC. The self-diagnostic function is embedded in the device's ROM, RAM, ADC, and clock unit on the chip. This helps engineers to obtain IEC60730 Class B functional safety certification.

Because they offer many systems in terms of functionality, MCUs are, in many ways, the ultimate system-on-a-chip. However, MCU suppliers seem to be constantly looking for new ways to enhance their MCU product lines' processing power, peripheral portfolio, and safety features.