1 Introduction to the GEM

The Gigabit Ethernet Controller (GEM) implements a 10/100/1000 Mb/s Ethernet MAC compatible with the IEEE 802.3-2008 standard, capable of operating in half or full duplex mode at all three speeds.

The PS is equipped with two Gigabit Ethernet controllers, each of which can be configured independently. To access the pins through the MIO, each controller uses an RGMII interface (to save the pins) and accesses the PL through the EMIO that provides the GMII interface.

Additional Ethernet communication interfaces can be created in the PL using the GMII available on the EMIO interface, for example, the PL can be used to implement these interfaces.

Registers are used to configure MAC features, select different modes of operation, and enable and monitor network management statistics. The DMA controller is connected to memory via the AHB bus interface, which connects to the FIFO interface of the MAC's controller, providing a decentralized-aggregation type of function for packet data storage in embedded processing systems. 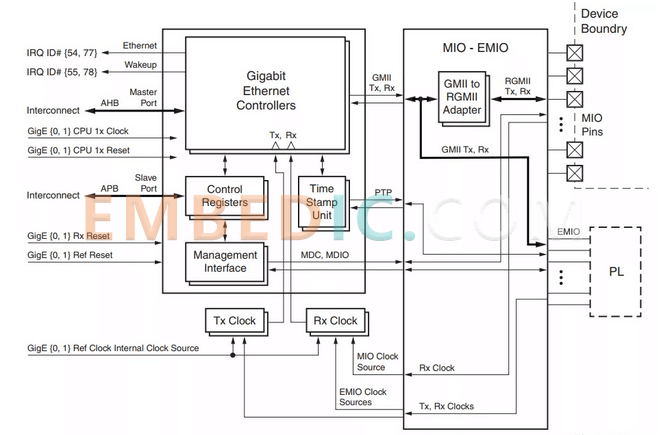 Each Gigabit Ethernet MAC controller has the following features.

The following figure shows the Zynq system view of the Gigabit Ethernet controller.

The Gigabit Ethernet controller has the following clocks.