Embedded and IoT industry trends in 2021

At the beginning of 2020, a sudden outbreak of the new crown epidemic has caused tremendous changes in people's production and lifestyles, spawning remote office, smart production, smart retail, smart cities and smart health, big data and artificial intelligence (AI). Play a key role in epidemic tracking, and the epidemic has given rise to the Internet of Things (IoT) momentum. On the other hand, the government has included IoT as an important part of the country’s new infrastructure and defined it as the infrastructure of the future digital economy. IoT and AI will lead embedded systems to the Intelligent Internet of Things (AIoT). 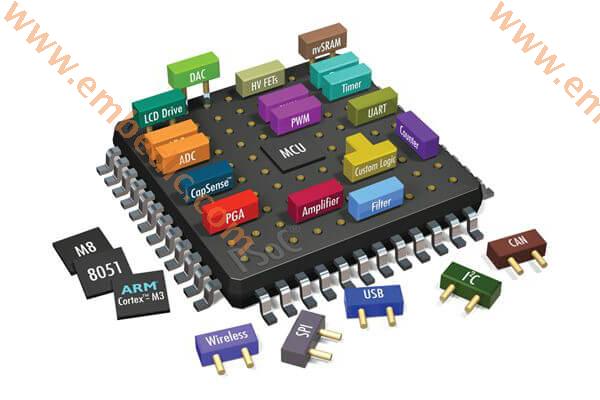 From the perspective of electronic information industry trends, AIoT represented by autonomous driving, smart robots and smart security is becoming the commanding heights of a new round of technological innovation. The 5G layout will greatly enhance end-side intelligence and help the development of AIoT. The evolution of cloud AI to edge AI and end-side AI is becoming clearer and clearer, and embedded systems are becoming an important platform for AI landing.

Backed by the "computing power" of cloud computing, the "big data" brought by IoT and the "algorithm" of super-intelligent AI, the three elements are brought together in the AI ​​chip and will become the soul of a new generation of embedded systems. The development of high-efficiency and low-consumption AI chips for embedded systems, especially SoC-type AI chips, will continue to be a hot spot for processor chip design in 2021.

ARM has an advantage in high-end embedded AI processors, and RISC-V has gained some gains in low-end IoT chips. Recently, new products have been continuously launched, and the mid-end has become the main battlefield for the two sides. ARM launched Cortex-M55, M55 adds an AI Helium technology, which can be used for the M-Profile vector expansion of Cortex-M core, providing it with up to 15 times the machine learning performance and up to 5 times the signal processing capability. M55 is A kernel designed for AI/ML. In 2020, Arm China's self-developed neural network processing IP-Zhouyi AIPU, Allwinner has released the R329AI chip based on Zhouyi.

In the embedded AI market, the choice of AI chip depends not only on the chip itself, but also on the software and ecological environment. At present, GPU has an advantage in general AI training, while SoC is more common in embedded end-side reasoning. Domestic chips have certain advantages in this field. In 2021, more SoC AI chips will enter the market.

The demand for 32-bit MCUs is strong in 2020, and traditional 8-bit MCUs are being replaced by domestically-made 32 MCUs with higher performance, larger storage capacity, more peripherals, and cheaper prices. The M0 core chips of domestic MCU companies represented by Smart and Hangshun are gaining momentum. Epidemics in Europe and the United States have repeated, chip production capacity has been reduced, foreign chip delivery has been greatly delayed, prices have risen, and global consumer and health electronic product demand has risen instead of falling; the sudden international political and economic environment has made domestic chips widely accepted and accepted by the industry. Policy support, these have allowed domestic MCU to enter the fast lane of development. Zhaoyi Innovation GD32 MCU has 28 product series and more than 370 product models provide a wide range of coverage, meeting the different development and design needs of more than 20,000 customers around the world, and has accumulated 500 million shipments since its launch in 2013.

Espressif’s CEO Zhang Rui’an pointed out two directions for ESP32 IoT MCU in 2021 at the Tencent Internet of Things Forum: One is ESP32-S, which has a built-in AI accelerator, which is suitable for product design with complex application scenarios and a higher degree of intelligence; the other is ESP32 -C, the chip is based on the RISC-V core, which guarantees a significant reduction in cost on the basis of RF and security, and meets the needs of various basic IoT industries. Based on Espressif's hundreds of millions of products in more than 200 countries around the world, this market trend judgment should be accurate.

The emergence of domestic MCUs represented by Espressif, Chipsea, BGI and Tianjian in IoT, signal chain and motor MCUs, Chipwon Micro has been deeply involved in the automotive MCU market, and Jihai and Citizen’s initial trials of industrial and safety MCUs have helped China After the company continues its cost advantage in the application-oriented market where it is good at, it enters the industrial market dominated by European and American companies. Of course, the final result of the competition depends on the design strength of MCU companies and the endurance of long-term competition.

The developer ecology has always been the shortcoming of domestic MCUs, and the development of its own ecosystem is a sunny road for domestic MCUs to break out of the price competition vortex and move towards the world market. With the rise of domestic software and operating systems, China has recovered from the epidemic and resumed normal production and life. The international industry is optimistic about the development momentum of Chinese MCU companies. 2021 will be a prosperous year for domestic MCU ecological construction.

The Internet of Things operating system is booming

The tremendous changes in Sino-US relations in 2020 have brought many uncertainties. Huawei has gradually launched various Hongmeng operating systems (0S). At the end of 2020, Huawei released a test version of Hongmeng OS mobile phone (known as Fu Hongmeng in the market) as planned. This shows that Huawei has accumulated a long time in mobile phone OS. If it goes well, the effect can be seen immediately. Hongmeng OS on the Internet of Things (known as Qing Hongmeng in the market), part of the code is open source, and the IoT ecosystem construction around Hongmeng is not an overnight effort. Hongmeng OS emphasizes "one-time development, multi-terminal deployment", such as direct deployment on smart watches and smart TVs or smart screens after mobile phone development. Huawei uses the distributed and device virtualization features of the OS software to realize an intelligent environment based on Hongmeng OS, which can already bring a demonstrative effect to the industry. Maybe you don't need to care too much about the Hongmeng OS kernel itself.

In 2021, the IoT operating system around AIoT will be used in the fields of Internet of Vehicles, smart driving, smart home and wearable devices. RT-Thread open sourced the micro-kernel RT-Thread Smart, hoping to enter the automotive electronics market by 2020. Pengxin Wearable OS was released at the RT-Thread Developer Conference at the end of the year, and it can be said to be well received at the time. The veteran RTOS company QNX displayed the dashboard of the QNX hypervisior+ Android mass-produced model at the Zhongke Chuangda annual meeting, which gave domestic counterparts the opportunity to get to know QNX up close. Technologies such as microkernel, virtualization, distribution, security, multi-core heterogeneity, etc. are important directions for the evolution of the intelligent Internet of Things operating system (AIoT) technology in the future.

Some people say that the three Internet antitrust tickets have declared the end of an era, but the pace of Internet giants to open up the IoT market shows no signs of slowing down. In the intricate 2021, the traditional embedded and IoT industries are facing huge challenges. Every link in the entire industrial chain from chip-module-board-card-software-equipment-system should enhance its own value. Innovation and standards are powerful weapons. Edge and end-side AI is a good case. Let AI land on the end-side, which can greatly increase the value of embedded and IoT devices. Creating IoT and AI standards, establishing a channel of mutual trust with Internet giants, and exploring the way to dance with the elephants are topics that should be considered and acted upon by the embedded and IoT industry in 2021.