Pictures are for reference only Please prevail in kind

EmbedIC has the unique source of supply. We can offer MPC8280CVVUPEA more competitive price for our customers. You can enjoy our best service by purchasing NXP MPC8280CVVUPEA, Please feel free to contact for the best price of MPC8280CVVUPEA MPU. Click To Get Quotation

A range of performance and package options

Taking advantage of the 0.13-micron process, the next generation of PowerQUICC II devices offers significant performance increases and power savings over the current generation PowerQUICC II devices, with speeds of up to 450MHz and 300MHz in the core and CPM respectively at less than 2 watts. The new processors continue to enhance the PowerQUICC architecture's industry-leading ATM support, offering up to 2 UTOPIA ports with support for up to 31 PHYs per interface -- ideal for high-density DSLAM line cards.

The next generation of PowerQUICC II solutions also delivers support for USB, an on-target addition for high performance SOHO and CPE networking equipment. And unlike most other integrated communications processors in the market, the PowerQUICC architecture integrates two processing cores to handle specific tasks: the core built on Power Architecture technology and the RISC-based CPM -- enabling a balanced approach for systems by handling both high-level tasks and low-level communications all in one integrated device. 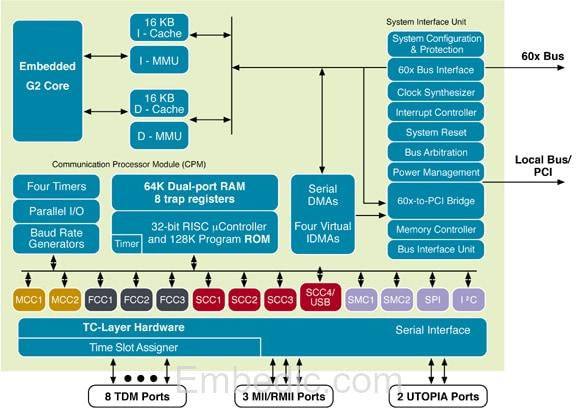