The Trend of Motor Control in Electrical Design

Many household appliances include one or more motors that are critical to their function. In the struggle to increase market share, new product design strives to make its products stand out from the competition. This article will explore five main trends that shape the future of electrical motor control, which is applicable to everything from HVAC systems to food processing.

Minimizing the power consumption of motors and compressors is still one of the major trends in electrical design. To a large extent, the U.S. Environmental Protection Agency (EPA) Energy Star Program for Home Appliances is driving this process. This program will rate products and provide corresponding labels, showing the annual electricity (kWh) required to operate the equipment. More efficient products will receive an Energy Star rating, which is a must-have home appliance attribute in the eyes of many consumers. Many governments in other countries provide similar rating systems.

Low-end equipment usually uses AC induction motors (ACIM). It is relatively simple to control these motors using variable frequency drives (VFD). In this technology, a three-phase sinusoidal waveform powers the windings of the motor. The control of the motor is achieved by changing the pulse width modulation (PWM) duty cycle. The PWM duty cycle sets the voltage and frequency through its rate of change.

For a VFD, as long as the load remains unchanged, a constant torque can be provided by keeping the ratio of voltage to frequency constant. Unfortunately, an ACIM equipped with a VFD responds slowly to changing load or speed requests, which reduces its efficiency. For example, washing machines usually use ACIM, and ACIM does not respond well to changes in variable load. This happens when wet clothes are turned inside the drum or the drum rotation changes during mixing.

The most direct way to improve efficiency is to change the type of motor running equipment. High-end equipment has begun to adopt a new type of motor called permanent magnet synchronous motor (PMSM). Due to design reasons, this motor provides better control, but the manufacturing cost is also higher.

PMSMs are more efficient because they use permanent magnets in the rotor, while the wound coils used in the induction motor rotor require additional energy to maintain the magnetic field. The advantage of PMSM design is that an improved control algorithm called Field Oriented Control (FOC) can be used. This algorithm can very accurately control the energy used by the motor over a wider load or speed range. Using a digital signal controller (DSC) to control the PMSM (such as Microchip's dsPIC33EV series) can help improve the energy efficiency of these motors and achieve noise-free operation.

In addition, using PMSM with FOC can save a lot of energy. For example, the compressor of a refrigerator is a specially designed motor that pumps coolant in the cooling system by extending the control range to a very low speed (such as 800 rpm). Therefore, the power used is reduced by about 30%. This can significantly increase the energy star rating of the equipment. Other studies have shown that PMSM can achieve 90% efficiency in converting electrical energy into torque.

On the other hand, electrical appliances such as electric drills, HVAC and exhaust fans require very high speeds. Field weakening (also called flux weakening) is a control technique that can rotate a motor faster than FOC technology. To this end, the voltage field in the stator winding encountered after the rotor magnet is charged in a way that cancels some of the magnetic field (called flux) in the rotor magnet. When the magnets of the rotor are aligned with the windings, this reduces the resistance to the rotation of the motor. This resistance is called reverse electromagnetic force (BEMF). By reducing the BEMF through field weakening, the maximum speed of the motor can be increased from 25% to 100%, as long as the required torque at that point in time is low. Since most electrical appliances do not require full load torque at higher operating speeds, magnetic field weakening can effectively increase their maximum speed, thereby improving operating efficiency.

The third major trend in electrical motor control is to minimize noise. Are you tired of the buzzing of kitchen appliances? Many people do not want to hear the sound of electrical appliances running at home. Mute is very important, and consumers are willing to pay more for it! 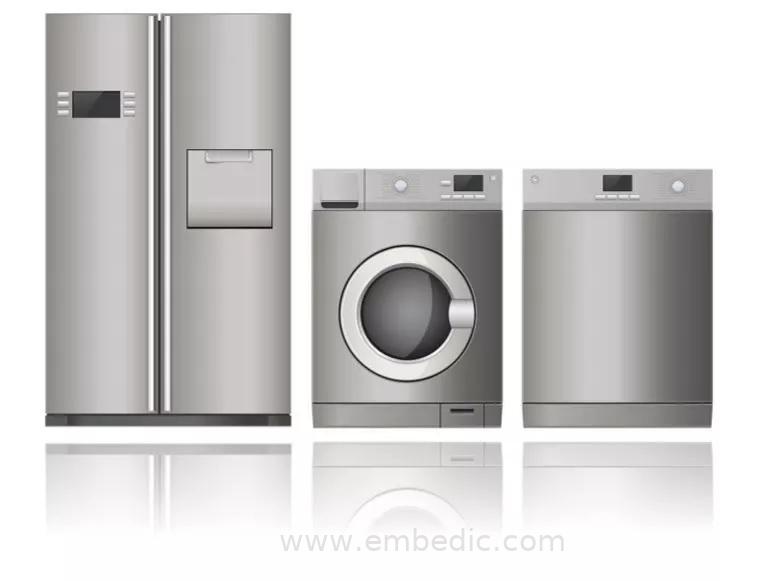 There are many reasons for the noise of electrical appliances. A sudden drop in the power supply voltage in the power line, as well as a sudden change in load or torque demand, may cause the rotor position estimate to deviate slightly. In addition, the timing of the PWM control signal may not be exactly the same as the rotor position. Any of these conditions may cause the rotor to shake slightly and produce audible noise.

However, the main cause of motor noise is to turn on and off Metal Oxide Semiconductor Field Effect Transistor (MOSFET) or Insulated Gate Bipolar Transistor (IGBT), which is a large transistor that transfers power to motor windings. Every time these transistors are turned on or off, the sudden impact of the current in the winding pushes the surrounding air (in the same way as speakers work), producing an audible sound or clicking sound. Multiplying this sound by three times (three motor windings) and repeating it thousands of times per second will produce a motor buzzing sound that is just within the range of human hearing (20 to 20 kHz).

Fortunately, we have a solution to reduce noise. It all comes down to cost, but the two key solutions are to switch the MOSFET at a higher frequency and broaden the PWM.

Although all motor control algorithms can use PWM frequencies of 20 kHz or higher to keep noise outside the hearing range of the human ear, many home appliances still use lower frequencies (usually in the range of 5 to 8 kHz). Turn off and turn on their motor control MOSFETs. This is because, at slower speeds, an integrated power module (IPM) (a package containing MOSFET) can be purchased at a much lower price.

Spread spectrum is another technique, and some designs are using this technique to further reduce noise. For this, a random number generator is used to change the PWM frequency. This will make the PWM frequency high and sometimes low, but the average PWM frequency will remain the same. By adding this jitter to the PWM frequency, the amplitude of the noise signal is reduced, and a significant noise reduction effect can be achieved.

There is a technique that is very practical in various home appliance motor applications. It involves mastering the position of the motor rotor relative to the stator before starting and at extremely low speeds. There are two main reasons for this. The first reason is that some electrical appliances cannot operate in reverse (such as pumps and compressors in air conditioning units). If the motor turns in the wrong direction when starting, even a small rotation may eventually damage the pump and cause it to break. The second reason is that appliances such as drills, food processors, washing machines, and fans need to obtain full torque from the start in order to reach full speed faster.

Unfortunately, the feedback circuit used with FOC (called estimator or observer) cannot work at zero or low speed. FOC is called sensorless technology. This means that there will be no Hall sensors, magnetic position sensors or optical axis encoders to provide rotor position. In order to function, the FOC algorithm obtains current feedback from the three motor windings. When the motor is started for the first time, the speed is too low, the feedback circuit cannot obtain a good reading, and the motor runs in an open loop mode. After the motor reaches a sufficient speed (such as 50 rpm) and a good current feedback is obtained, the control loop is closed and normal FOC is performed.

In order to be able to detect the rotor position when the motor is started or running at low speed, a technique using high frequency injection (HFI) has been developed. In this technique, the three windings in the rotor are energized one by one through high-frequency PWM signals, and the current feedback signal is measured. By comparing these three measurements, the exact position of the rotor can be determined and the rotors of the pump and compressor can be started in the correct direction using the correct PWM signal. This will also speed up the motor faster.

Another new technology is called "Fengzhuan". Through the wind rotation, the motor in the coasting state can be restarted to match the current position and speed of the motor, so as to realize a smooth restart without shaking. This will not only help reduce noise, but also improve the durability of the motor.

In addition, you can also control the motor by using FOC to maximize torque. This technique is called Maximum Torque Per Ampere (MTPA), which allows the motor to accelerate after a closed-loop conversion in the constant torque phase. Using this technology, the washing machine can achieve high-speed rotation, discharge more water from the laundry, and the drone's motor can also accelerate from 0 rpm to 30,000 rpm in less than 300ms, thereby achieving faster take-off.

The last trend is crucial. A campaign to improve product functional safety has been initiated in the industry. This means that electrical components—that is, microcontrollers (MCUs) or digital signal controllers (DSCs) that control electrical motors need to have built-in safety features that meet industry specifications. For example, the IEC 60730 Class B safety specification requires that the default state of the PWM signal of the MCU or DSC be turned off at startup to prevent any transient voltage spikes that may cause the motor to rotate. In the future, the industry will prepare a functional safety manual for motor control design engineers to help them better understand how to use all the safety functions built into MCU or DSC motor control devices. This trend will make motor-driven household appliances safer and ultimately benefit everyone.